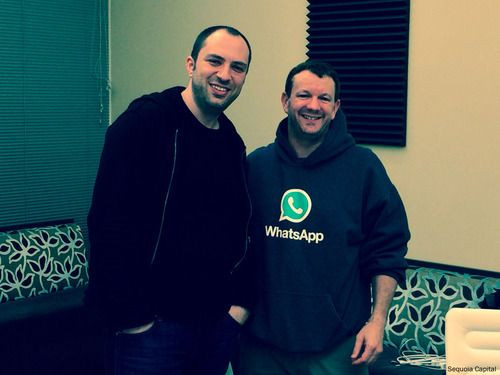 This story of success will be one more great example of how people should never give up. The story is about Brian Acton, computer engineer and internet enterpreneur from US. In 2009, two big companies (Twitter and Facebook) turned him down for employment, however, after he did not get into Facebook, he was “Looking forward to life’s next adventure”. Guess what happened? Brian Acton created the most popular mobile messaging app in the world – WhatsApp.

Brian Acton was born in 1972, in Michigan, USA. He graduated from Stanford University as a computer science student and started his career in 1992. He worked for big companies such as Apple, Yahoo and Adobe.

Acton’s mother ran a freight-shipping firm and gave him early insight into running a business and meeting payroll. After Acton and Koum left Yahoo in 2007, Acton became WhatsApp’s first investor.

Acton met another co-founder of WhatsApp, Jan Koum, as they were working together in Yahoo. They both quit in 2007 and travelled around South America for one year. Later on, Acton and Koum applied for a job in Facebook and both were rejected. After the failure, they decided to create a messaging app, which currently is the most popular around the globe.

Believe it or not, WhatsApp was sold to Facebook in 2014 for $22 billion. WhatsApp is now the biggest mobile messaging service in the world, with 800 million active users, the vast majority of whom are outside the U.S.

Brian Acton now has a net worth of $5.1 billion. He is ranked 138 among the Fortune 400 people by Forbes and 338th billionaire in the world. He is ranked as the 120th wealthiest man in the United States of America.

The lesson behind this story: you never know what is coming to your life next, just don‘t forget to try harder tomorrow, as one rejection can push you to the next level – acceptance, which is, in this case, much more valuable in all possible ways.